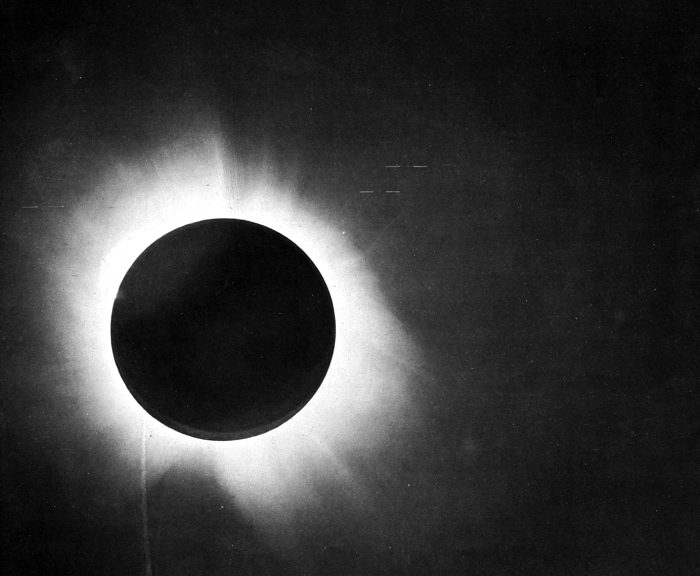 The photo above is a positive image of one of the photographic plates taken in Sobral, Brazil, during the 1919 total eclipse of the sun. The data from this and other images taken at the time were used by Dyson, Eddington and Davidson (1920) in the first independent confirmation of the gravitational deflection of light as predicted by Einstein’s theory of general relativity.

In 1915, Einstein published his theory of general relativity. In 1916, he suggested there were three tests which would confirm the theory’s validity:

Furthermore, he stated that all three were necessary tests though none of them would be sufficient by themselves. All three tests as a whole would be sufficient since each one demonstrated different phenomena predicted by general relativity. The first test was almost trivial since the abnormal precession of Mercury was already known; and in fact, Einstein had already done the analysis to show that general relativity explained Mercury’s precession.

Wanted: A Total Eclipse of the Sun

The first independent confirmation of general relativity was the observation that the travel path of light could be bent by gravity. This was achieved by comparing the normal positions of stars with their positions observed during a solar eclipse. This test works because the sun is massive enough to bend light. If general relativity is valid, then the sun’s gravity will bend the travel path of any starlight that passes close to it. If the travel path is bent, then an observer on Earth will see this as a shift in the relative position of stars in the sky.

The problem with this test is that the light of the sun obscures starlight during the day making it impossible to observe any positional shifts. A solar eclipse is the only time when star positions can be seen next to the sun. If general relativity is valid, then comparison of stellar positions during an eclipse with positions in a sun-free sky should show positional shifts close to what general relativity predicts.

The bending of light by gravity is not a feature unique to general relativity. It is possible to show that light is bent by large gravitational masses, both by Newtonian physics and by using Einstein’s equivalence principle which is part of special – not general – relativity. The amount that light is deflected is the same for both approaches. For this reason, science writers tend to label the deflection calculated on a classical Newtonian or equivalence principle basis as the Newtonian deflection of light. The catch here is that light is bent twice as much according to the rules of general relativity.

General relativity introduces all sorts of mind-bending concepts that hurt the brain. For example, time flows slower next to objects of great mass, space is shortened in the direction of travel, and most important, spacetime itself can be curved. The geometry of spacetime is not Euclidean.

The take-home point is this: the confirmation of general relativity requires that light be bent by gravity, and that it should be bent twice as much as what’s predicted by Einstein’s equivalence principle and Newtonian physics.

THE ECLIPSE EXPEDITION OF 1919

Einstein published his theory of general relativity in 1915, in German. An English astronomer, Arthur Eddington of Cambridge University, was aware of Einstein’s work and thought it had merit. Despite the general acceptance of general relativity today, Einstein’s work was neither immediately nor universally accepted when it was first published almost a century ago. Eddington was an early advocate of the theory and he saw an opportunity to test it. He recognized that the total eclipse of the sun predicted for 1919 would place the Hyades star cluster along the sun’s path, thus placing the positions of several bright and well-known stars next to the sun during the eclipse. Such a favorable juxtaposition of the sun and bright stars would not occur again for decades.

The 1919 eclipse was literally the opportunity of a lifetime to confirm or refute one of the necessary conditions of general relativity. With the help of the Astronomer Royal of the Greenwich Observatory, Sir Frank Dyson, Eddington organized two teams to make observations of the eclipse, in two different locations along its path: Sobral, Brazil and the Island of Principe, off the coast of Africa.

The project almost failed. The sky was not completely clear on Principe so no stars were visible on the photographic plates. In Sobral, the main instrument with the 16 inch lens did not function as planned because of distortion of a mirror due to heat: the images on most of the plates were out of focus. The project effort was saved by the back-up instrument in Sobral which used a 4 inch lens. Though the accuracy was not as good as the 16 inch lens would have provided, the images from the 4 inch lens were clear and provided satisfactory data.

The graph shown below is from the paper that reported the results of the British 1919 eclipse project. The dots on the graph are the actual measured data and it is clear that they fall very close to the position displacement trend predicted by general relativity shown by the heavy solid line and not at all close to the trend predicted by Newtonian physics shown by the dashed line. Eddington and his co-authors published their results in 1920. Given all the problems they had in collecting the eclipse images and the subsequent reduction of the data by hand without calculators or computers, this is an amazing result despite a data set of just seven points.

Eddington’s 1919 confirmation that light is bent by gravity with results that support general relativity has not escaped the unfortunate anti-intellectual disparagement of postmodernism. Starting with a hint that Eddington may have been a little too biased towards Einstein’s general theory of relativity in Sciama’s 1969 popular science book, The Physical Foundations of General Relativity, doubts have grown as to Eddington’s possible fudging of the 1919 data to fit Einstein’s theory. There are hints of this in Hawking’s best-selling Brief History of Time, and these morph into mealy-mouthed discrediting in John Waller’s 2002 book, Einstein’s Luck. Such pronouncements do not help at all to mediate the growing anti-intellectual dissing of science in general.

To steal a line from Kennefick’s paper on the 1919 eclipse expedition (cited below), in the vox populi of the internet Eddington has become one of those self-serving scientists who fudged his data to fit the theory he wanted to prove.

Like Millikan and the oil drop experiment, Eddington and the eclipse have become part of the myth of the dishonest scientist and the faked data, no thanks to recent popular science writers who make their money by crapping on the experimental results of scientists too dead to defend themselves. In the case of Eddington and eclipse data, what has been neglected by these modern commentators is the fact that the original photographic plates as well as the rest of the 1919 eclipse data have been scrutinized not just once, but twice, in 1979 and again in 2005, with the verdict that the eclipse data was good and the conclusions based on that data were sound.

Here’s one final thought in conclusion: as pointed out at the beginning, the deflection of light by gravity is only one of the three tests suggested by Einstein to prove general relativity. Both Einstein and the British astronomers involved in the 1919 eclipse project knew this and said so in their respective publications. The fact that the gravitation bending of light is a necessary but not sufficient proof of general relativity is a crucial nuance that gets lost in the noise of discussion.

John Waller; Einstein’s Luck: The Truth Behind Some of the Greatest Scientific Discoveries, Oxford University Press, 2002.