At the dawn of the 21st century, the US Federal Bureau of Investigation promoted research into quantitative methods of measuring corpse gasses as an adjunct or possible replacement for cadaver dogs. They funded a joint project with the University of Tennessee body farm and a soil gas group at the Oak Ridge National Laboratory.

A body farm is just what it sounds like: it’s a plot of land where researchers plant corpses in order to study the forensic science of the decay of buried remains. There are a number of such body farms around the country, including the long-established, forensically-famous one at the University of Tennessee. The soil gas researchers at Oak Ridge used the U of Tennessee body farm, first to characterize all the possible gasses given off as bodies decay in the ground and then to develop a field instrument that could identify those gasses at an accuracy and sensitivity comparable to trained cadaver dogs.

The final report of the Oak Ridge group, cited last week in Part I of this blog post, found that over 400 different gasses are given off by decaying human remains. They not only identified the gasses, but they did so using bodies buried buried from zero to twelve years, at different depths and in different soil and environmental conditions. They also determined that about 40 of these gasses:

“make it to the surface in a reproducible fashion regardless of the depth of burial, and the age of the grave.”

This is an astounding result. What this means is that corpses give off a distinctive mix of gasses whose detection can replicate the ability of a cadaver dog to identify clandestine buried human remains. Their research also profiled how the mix of gasses changes as the remains age in the ground. The really incredible thing hiding in their results is that completely decayed remains can still be found using soil gas detection methods based on the gas profiles the researchers developed.

The second part of the Oak Ridge National Lab and University of Tennessee body farm study was to build a portable soil gas analyzer. This instrument was meant for use by law enforcement personnel in the field. The study objective for the instrument specified that it should identify buried human remains using on-the-market off-the-shelf components.

Realizing that the 40 or so corpse gasses which identify buried remains can be sorted into gas categories, the researchers decided to use heated metal oxide or Taguchi sensors, so named after their inventor. They designed an array of 12 Taguchi sensors to detect the broader gas categories. After extensive testing, they determined their approach worked and were able to actually publish the detection profiles across all 12 sensors for bodies buried for different amounts of time. They were also able to verify that their soil gas cadavermeter design could identify remains with an accuracy that was comparable to cadaver dogs and laboratory analysis of soil gas using a mass spectrometer.

They called their instrument the LABRADOR, which is an acronym for “light-weight analyzer for buried
remains and decomposition odor recognition.” Not only did Oak Ridge once again deliver cutting-edge research, but they also confirmed the ability of US government agencies and contractors to create mind-boggling acronyms for just about anything.

After a lifetime of tromping around the outdoors schlepping all sorts of geophysical field instruments, I took one look at the LABRADOR cadavermeter and knew I’d hate using the thing, assuming I’d ever have the chance. The bulk of the instrument is hung and held on just one arm with no shoulder or back strap to help support it. The LABRADOR set-up will run for 6 hours on the built-in battery but given my experience in the field with instrumentation, I knew that I would have a sore arm in about a half hour and and unusable arm in three or four. It’s not a person-friendly field instrument.

Since you can now get relatively inexpensive heated metal oxide sensors for Arduino and Raspberry-Pi boards, popular platforms for do-it-yourself electronics, I decided to see if I could build my own usable, workable and easy-to-carry cadavermeter that could exploit the Oak Ridge corpse gas research. Here is my second version of my own cadavermeter: 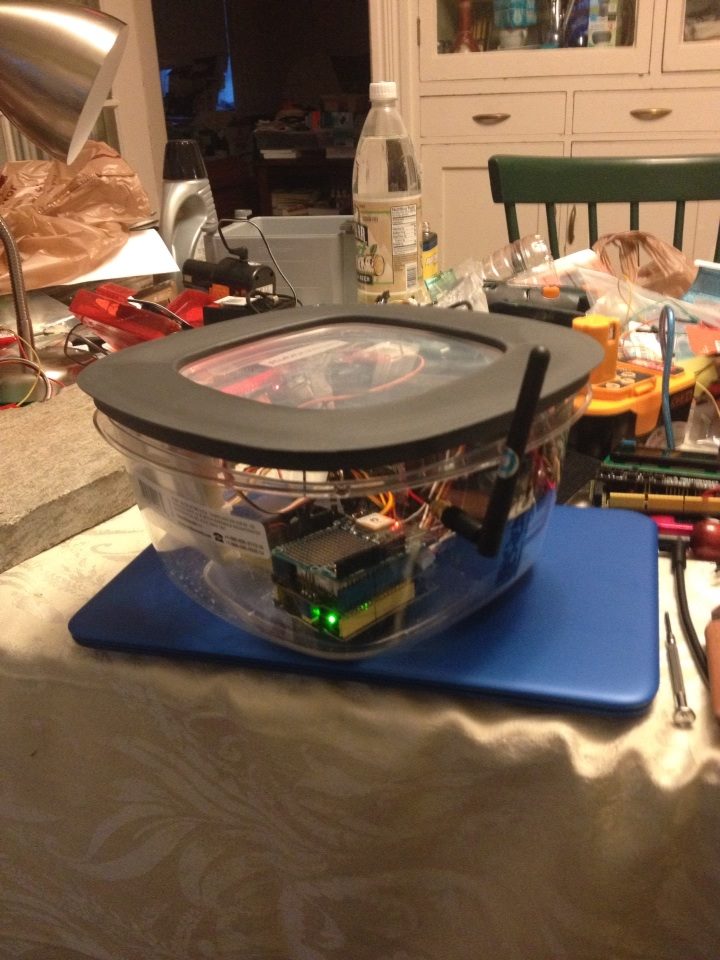 Check it out: it displays the data from 4 gas sensors, gets a gps fix and writes it all to a micro-SD card. There’s an itty bitty fan on the bottom to move outside air in and vents next to the GPS antenna to let air out. There’s still one sensor to add but I had to special order it and haven’t had time lately to wire it up. Since I’m out of pocket and don’t have a big research grant to play with, I selected the five gas groups that the Oak Ridge folks identified and detected for late-stage decay; and have initially concentrated on just those. All this at a fraction of the cost of the thousand dollar instrument made at Oak Ridge. My cost thus far is about $200, mostly for the sensors. The best part: it’s built into a waterproof tuperware container and weighs four pounds. I’m still playing with this concept but intend to write an app to run my soil gas cadavermeter from a cell phone.

Why am I concentrating on late stage decay? Because I’ve been involved in looking for human remains that by now are in late-stage decay. Older human remains hit on only 5 of the 12 sensor types, so for my purposes, I’m passing over the other seven sensors. The heated metal oxide sensors are the most expensive components of my soil gas cadavermeter and since I actually would like to use the thing for the still on-going search for Susan Powell’s remains, I just can’t justify the other seven sensors at this time. Maybe if my cadavermeter actually works in the field, I might build a 12 sensor version – but that’s still an if in my book.

I have a selection of known buried remains sites I intend to test my prototype at, and if it looks like it works, I intend to approach the research body farm in Grand Junction, Colorado and request if I can use their facility to do rigorous testing. But that’s something that won’t happen for a year or two, given that building stuff like this is a hobby and not what I do for a living

The moral of this story is this: if you know a bit about chemistry, data collection in the field, and do-it-yourself electronics, you too can build something like this. Unlike Big Science that’s out of the reach of the public and Big Science practitioners that look down on non-professionals, this sort thing is real instrumentation that’s in reach of the home scientist or the interested law enforcement officer looking to explore a new technology on a shoestring.