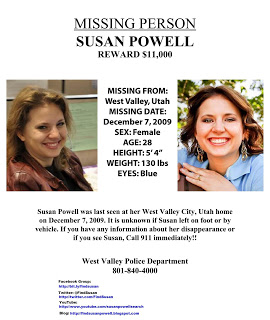 Beginning in 2010, I had the opportunity to help in the search for Susan Powell, a mother of two toddlers from West Valley City, Utah. Susan is a missing person. She was last seen on the evening of December 7, 2009. Her husband, the now-deceased Josh Powell, remains the sole “person of interest” in her disappearance. The details of her case made headlines internationally so I won’t repeat them here. There are three good “true crimes” books out on the case including one of the last books written by the queen of the true crime genre, Ann Rule. These three books are:

There are some other books out there on the case but they are throwaway grocery-store paperbacks or the internet-equivalent, the cheap slapped-together ebook. All of them have substantial errors, written by people who did not do any of their own research nor did they contact any of the people involved in the case. The above three books are the only ones I recommend.

THE DETECTION OF HUMAN REMAINS

The Susan Powell case stretched my brain and led me eventually to research how one goes about discovering dead bodies. A lot of the science behind this subject has to do shallow geophysics and soil gas. I have professional experience in both these subjects. I’ve done a fair bit of both shallow geophysics and borehole geophysics, mostly for the investigation of hazardous waste sites and spills. I’ve also done some soil gas work, mainly in the detection of hydrocarbons plumes originating from leaking underground tanks. Many of the same techniques are used in forensic investigations to find buried human remains.

By my own professional opinion, the best methods are finding buried human remains are soil gas, ground-penetrating radar, and far-infrared imaging.

Soil gas methods can be very powerful here. Corpses give off gasses while they decay. For years, law enforcement professionals have used two different soil gas methods: cadaver dogs and soil probes. Soil probes are usually quite simple: you take a pointed metal probe and stick it into the ground. You can stick a lot of holes into soft dirt. Your can do this using a grid to cover a lot of ground. When you poke the hole in the ground, you use your nose to sniff. It sounds like a waste of time but this method is actually very powerful if the corpse is still decaying and the soil is soft enough to probe.

Cops of have actually found a lot of buried bodies using this simple method. It has its weaknesses though: first, you need to have a good idea beforehand where there might be a clandestine burial and you need also fairly soft or unconsolidated soil for this method to be effective. If you’re looking for a bodies in a plot of ground large than a football field, this method is too much work to be practical. It also depends on the ability of the sediments above a buried body to catch and retain enough corpse stench for a human nose to detect. To be frank, a cadaver dog is quicker, cheaper and more powerful than the traditional soil probe method.

Ground-penetrating radar (GPR) is a very powerful shallow technique. A typical GPR rigs looks like weird foot-scooter or lawnmower loaded with an equipment box. This strange-looking instrument is walked around a site in a grid pattern to make a set of 2D cross-sections or 3D images. You need a trained geophysicist to collect and interpret the data but the images you get are splendid of the shallow subsurface down to about six to eight feet. The huge downside of GPR is its cost: both for the instrument and for the geophysicist. It’s a method that’s out of the price range of small small police departments if a GPR rig isn’t available at low-cost from a nearby city, state or federal law enforcement agency.

Because decaying corpses give off chemical-decay heat and encourage infrared-emitting processes of microbes, mid-to-far infrared imaging (IR) can spot clandestine graves. This is great method to find buried bodies but it too has its limitations. First, you won’t find remains which are no longer decaying. Next, the cost of a good mid-to-far IR package is expensive and rental of a fieldwork-worthy IR instrument is steep. You also must have a good idea where to look for an IR signature and you need a trained operator. The biggest downside of IR is the problem of false positives because many different soil processes create an IR image. For example, the first time I used IR was in spotting the direction of a plume of leaking diesel fuel. A clandestine grave will show up on IR but so will a lot of other subsurface processes that involve chemical breakdown and the growth of microbes. There is ongoing research on using hyper-fine wavelength detection of IR for finding buried remains but results thus far are not yet conclusive that this a viable and cost-effective method.

Some of the shallow electromagnetic and resistivity methods can also find a clandestine burial but graves are smaller than the optimal scale of even the most localized of the electromagnetic and resistivity surveys. They are like using a pitchfork to eat breakfast. A trained geophysicist is also necessary to process and interpret the data. The upside to these methods is that they don’t rely on the detection of corpse decay like the soil gas and IR methods; however, the scale and the cost of such methods make them impractical for finding buried remains.

The most cost-effective and practical detection method for finding dead bodies is the soil gas method of using cadaver dogs. Dogs have amazing noses and you can train them to detect a variety of smells, like those given off by explosives, drugs, living people and corpses. Cadaver dogs can find clandestine graves and disposed corpses in other places too like attic trunks and abandoned buildings. They can detect odors even down to the parts-per-billion scale, as good as the most laboratory gas chromatometers.

Dog trained to find human remains are called cadaver dogs. These dogs are trained using two chemicals, cadaverine and putrescine, both of which are produced by decaying human remains. These stinky odors make up a large part of the horrible stench of decaying human corpses. Because corpses of other animals also produce cadaverine and putrescine, cadaver dogs also train on human remains so they can learn to distinguish between the remains of people vs. animals

Cadaver dogs do have their weaknesses as a detection method. First, the detection of all smells is affected by the weather. If the temperature is below 40ºF (~5ºC), dog noses don’t work wells since lower temperatures suppress the spread of gasses. This was a problem that came up in independent review of the evidence collected by law enforcement for the Susan Powell search: many of the initial searches took place on days where the temperature was below freezing and these site were not revisited by law enforcement once the temperature rose in the Spring following Susan’s disappearance.

Wind is also a factor. If it’s too windy out, it’s harder for a dog to detect odors or a dog may make a detection of remains that’s been carried by the wind for a distant site. For example, in one of the civilian-initiated Susan Powell searches, there was a potential cadaver detection made in the off-shore direction on the side of Utah Lake. Such a detection could be from corpse gas from a sunken body just off-shore or it could from the other side of the lake. I’ve also seen a review of a corpse disposal case where the cadaver dogs made a positive detection of corpse gasses trapped in a hollow that had blown in from the actual clandestine burial site several thousand feet away. It took an astute dog handler to follow the prevailing wind to find the human remains in this instances.

Cadaver dogs are good but they are not infallible. Also, since a dog nose is not something that can produce quantitative data, the detection of a burial site without a body can be challenged in court. Yes, such things can happen. A body that’s buried can be exhumed and moved elsewhere. In a court case with an exhumed burial site but no body, some other evidence is needed to collaborate a dog’s cadaver detection.

It’s unfortunate that cadaver dog detection of dead bodies can be challenged in court when no measurable human remains are present. Such evidence may have found during one of the searches in the Susan Powell case. Cadaver dogs made multiple positive detections on a location near where Susan Powell’s family had gone mineral collecting. Excavation of the site by law enforcement found materials that had been burned but no body.

Cadaver dog noses are wonderful tools that have found a lot of clandestine graves. Their downside is that lack of quantitative data. There are ways to work around this, one of which is to use gas chromatography. As a young environmental scientist, I once used a portable Foxboro flame-induced ionization detector with a built-in gas chromatograph (abbreviated as FID-GC) to detect the signs of subsurface pollution. It was a bear to use but it was smaller than most purses and easily portable in the field. A couple of years ago, I went looking to see if something like my old Foxboro FID-GC was still around to rent, specifically to use on the excavated non-grave the police dug up in the Susan Powell case. Alas, it appears that Foxboro no longer makes an FID-GC and there was nothing I could find like it to buy or rent that was comparable to that old workhorse Foxoboro I used back in the 1980s.

During my search for an FID-GC, I did find a most amazing little study done at Oak Ridge. This study was on soil gas characterization and the potential for using metal-oxide semiconductors to detect those gasses. This direction of research is worth a detailed discussion of its own, which will be published as Part II of this blog post on Saturday, August 26.