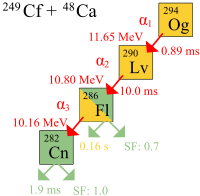 My blog posts are going to continue to be science-lite until we’re done with our move from Maine to Idaho, sometime in mid-October.  This week’s science-lite offering is our newest element, the element 188, which was officially named  just last year as Oganesson, after physicist Yuri Oganessian, who headed the joint Russian-American team that made the discovery of the element in 2006.  They collided atoms of California-249 and Calcium-48 to produce three – and maybe even four – atoms of element 118 as the isotope Oganesson-294, the heaviest element now discovered and the one to finally complete the periodic table row of the transactinides.  From a physical chemistry perspective, this is a very big deal. Oganesson is thought now thought to be a solid, but since it’s lifetime is measured in milliseconds, that’s not a sure thing yet.

Those three or four atoms of Oganesson-294 were unstable, since everything above Uranium is that way naturally. Everything above Uranium decays into lighter elements – there are too many protons and neutrons in the nuclii of the greater-than-uranium elements for the strong nuclear force to be effective in preventing decay.  Oranesson decays by alpha-particle emission, as shown in the decay diagram shown above (figure credit for the diagram goes to TKDG2007 at the English Language Wikipedia, 2009 by CC BY-SA 3.0).

The oddicial announcement of the acknowlegement and naming of Oganesson is at https://doi.org/10.1515/pac-2015-0501.  The wikipedia article at https://en.wikipedia.org/wiki/Oganesson is not bad at all.