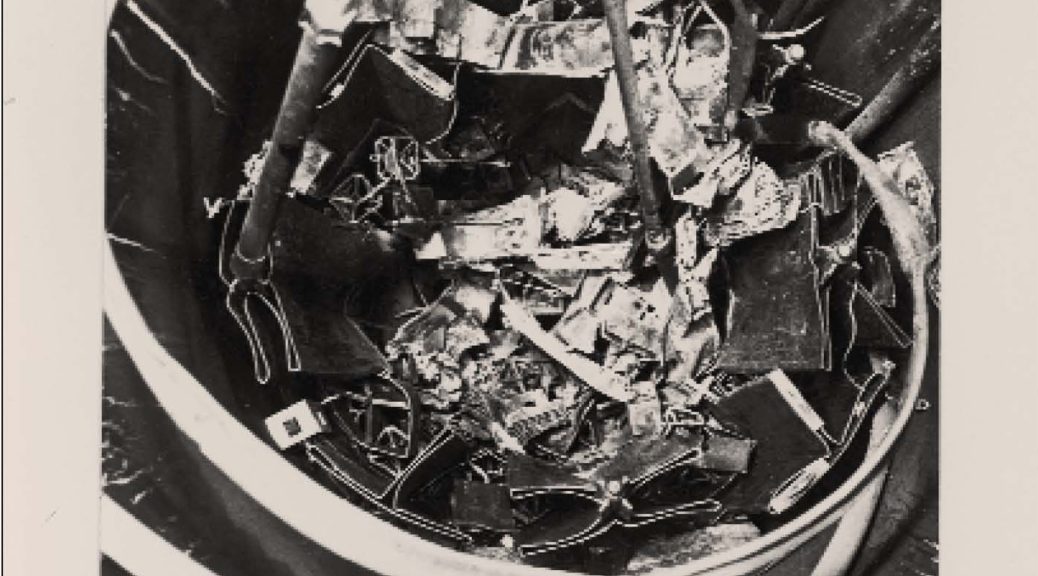 The above image is a photo of the mangled insides of the SL-1 reactor after its criticality excursion accident.

We’re still in science-lite mode here until the move across the country is done. Writing to maximize SEO is still disabled. Packing and moving is not my idea of a good time.

Today’s science-lite offering is a video made by the now-defunct Atomic Energy Commission about the SL-1 Reactor accident in 1961. Playtime is approximately 40 minutes:

The video includes footage shot remotely on the insides of the post-accident SL-1 reactor. I think it might be the only video of its kind. You just don’t get to see the insides of a destroyed nuclear reactor everyday.

The rest of this post is a bit of rambling – and it’s also more personal than usual; but hey, I’m in the middle of moving and writing good SEO blog prose is just not in the cards.

My father got on at the ground floor in nuclear engineering with his first job: working on the Manhattan Project. I still don’t know what he worked on. Regardless, after WWII was over, he got into the reactor business. I grew up listening to my father’s wisdom on nuclear reactor safely: “there’s never been a fatality involving a commercial nuclear power plant reactor.” In hindsight, that’s actually a bit twisted and loaded with caveats but it’s STILL a true statement. Here are the caveats:

All of those caveats shave the truth little too close. What my old man never told me in all of his nuclear tales was that in the Dark Ages of nuclear power, the US Army wanted their own reactor project. They wanted an itty bitty reactor they could airlift into remote areas that could run for three years without refueling. A design by Argonne National Lab evolved into a working prototype operated by Combustion Engineering called the SL-1, built at the National Reactor Testing Station in the desert outside of Idaho Falls. It was designed to deliver 200 kilowatts of electricity and 400 kilowatts for space heating. Its intended use was to provide power and heat to small installations in cold places, like radar sites along the Arctic Circle. This was back in the days when our oldsters worried about Russian bombers flying over the North Pole to drop nukes on us.

In the dead of Winter in 1961, the SL-1 suffered a criticality excursion during maintenance operations.  A maintenance procedure required that an operator physically lift a control rod assembly a few inches manually. There was no engineered control in the design to prevent lifting the assembly too far. This is important since lifting the rod assembly too far would cause an excursion. That’s nuke-speak to describe a short-lived fizzled fission chain-reaction.

Murphy must have worked at this place because that’s exactly what happened: the control rod assembly was manually lifted by an operator too far – that’s operator error; and there was no mechanical stop to prevent him from doing so – and that’s lack of engineered safety controls. It’s a double whammy as far as safety is concerned.

So the control rod was lifted too far out of the itty bitty reactor. Thermal neutrons ran wild. Fission started. Energy was released. Temperature spiked. A very small amount of uranium fuel melted. Coolant water flashed to steam and water hammered the lid of the reactor where the operators were standing. The force of the water hammer picked the whole reactor vessel up and actually lifted it nine feet into the air from out of its concrete bed, sheering off all the coolant pipes. The rod assemblies were blown out the top of the reactor. One of the assemblies impaled one of the three operators to the ceiling.

Here’s a YouTube link to the AEC SL-1 briefing film which has an animated scenario of the accident:

The entire crew of three reactor operators died. The reactor was not producing power at the time because it was down for maintenance. It was not hooked up to the electricity grid. It was not a commercial reactor. There was no public utility nuclear power plant fatality here.

The operation of the West’s commercial nuclear reactors at electric power generating stations remains fatality-free to this day; however, the pile of caveats attached to that statement is a mind fart.

The truth is this: the first fatalities at a nuclear reactor designed to produced electric power occurred in 1961 when three men died in Idaho at the SL-1.

Besides the SL-1, the only other power plant reactor in the world that has had both fatalities and melted fuel was Chernobyl-4. There is some irony here since the SL-1 design was similar in many ways to Chernobyl-4. For both reactors, the top of the reactor was its working face and there was no secondary containment. Neither reactor was in normal production mode for generating electricity: Chernobyl-4 was conducting a test and SL-1 was down for its regular maintenance.

SL-1 and Chernobyl-4 exposed people to acute fatal levels of radiation. Three Mile Island and Fukushima Daiichi did not. The former lacked containment structures; the latter had them.

Every power station reactor that generates public-utility electricity outside of the former Iron Curtain nations has a containment. We don’t build power-plant reactors like the SL-1 anymore.

If you have the chops for reading engineering reports, go to www.osti.gov and search on SL-1 reactor to read the original reports on the accident, its clean-up and its causes. Those old original reports are pure nerd candy.