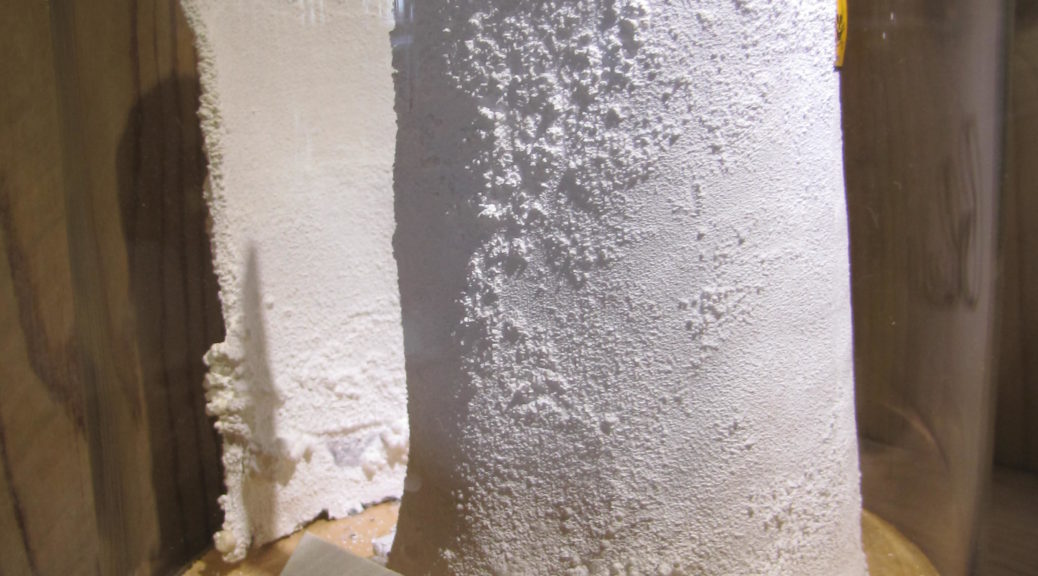 Today’s article may be the last of the “Science Lite” posts since by this time next week, we may be unpacked enough to resume normal life after the moving across the country.  |  Everyone knows there’s a problem with little kids eating paint chips because of the danger of lead poisoning. The real culprit is not even the main lead-based white pigment but rather a lead-based contaminant found in lower-quality paints. The antiquaited name for this contaminant was sugar of lead.

The pigment known as lead white is the queen of all white pigments. It has the highest opacity of all the white pigments. Chemists call it basic lead carbonate and it has a formula of 2PbCO3·Pb(OH)2. When it occurs in nature, it is the mineral hydrocerussite, which is an uncommon secondary mineral found in the oxidized portions of lead deposits.

THE MANUFACTURE OF LEAD WHITE

The long-dead Roman Pliny the Elder documented the oldest method of making lead white pigment almost two thousand years. This method has remained mostly unchanged into the twentieth-first century. Regardless, because of the problems of modern-day lead poisoning, no one makes lead-white pigment in large quantities anymore. Today, only a few specialty firms produce a very small amount of lead white for use by artists.

There are two different ways to achieve the second step in the process.

A MATTER OF TASTE

Pure lead white, which is basic hydrous lead carbonate, has a metallic taste to it. It was not the problem in the child poisonings from lead paint. The problem was the incomplete conversion of lead acetate into pure lead white pigment.

Lead acetate has a sweet taste. It’s so sweet that it used to be called “sugar of lead.” It is as sweet as white sugar. Flakes of white paint containing lead acetate taste like candy to infants and toddlers who, as we all know, have a habit of putting all sorts of stuff in their mouths.

So now you know why there was a great push to get rid of lead-white paints, especially for paints used inside buildings where children lived. Nibbling on chips and flakes of lead white paint poisoned a lot of small children. As a consequence, those kids often suffered permanent brain damage. They ate the paint because the paint flakes tasted sweet. That sweetness came from the sugar of lead which failed to transform into basic lead carbonate during the pigment-making process.

The banner image for today’s post is a photo of a lead acetate crust rowing on a substrate of a metallic lead toll, by Concord (Own work), CC BY-SA 3.0, via Wikimedia Commons.