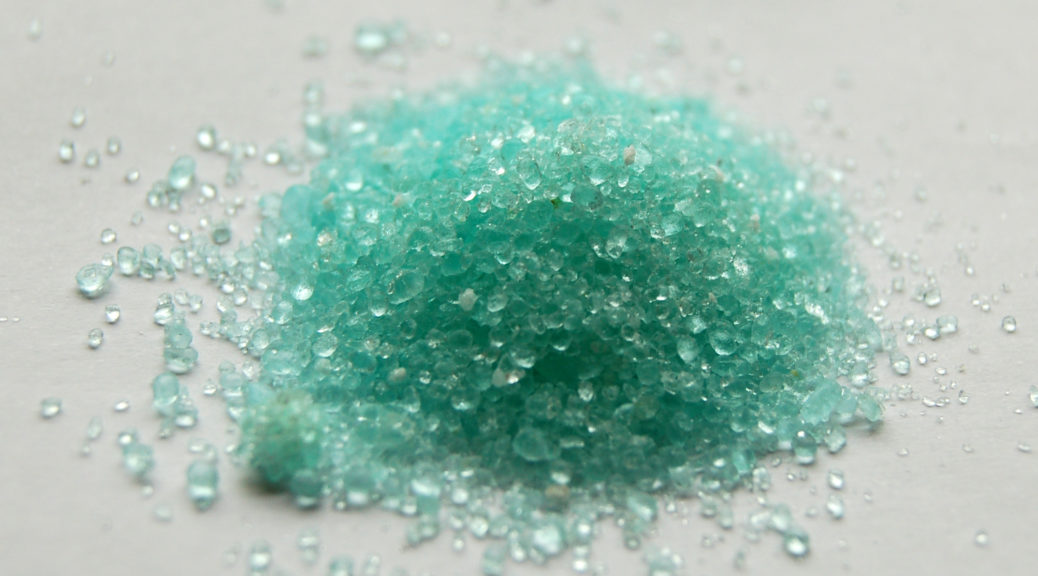 WHAT IS A VITRIOL?

Simply put, a vitriol is a metallic sulfate compound, often but not always hydrated. The crystals of most vitriols are glassy and all are soluble in water, making solutions containing sulfuric acid. In fact, the very word vitriol has its origin in the Latin word for glass, vitrum.

Out of the ten or so vitriol compounds, one is common and occurs along faults and oxidized zones in metallic mineral deposits: green vitriol, better known to geologists and miners as the mineral melanterite, or to chemists as iron sulfate heptahydrate, FeSO4·7H2O. Pure green vitriol is a transparent pale green solid. Not surprisingly, it has a glassy luster just like broken glass.

On the surface of the earth, green vitriol that is most common form of vitriol. As the mineral melanterite, you can find it at most iron, zinc, lead, copper and other metallic mineral deposits. These mineral deposits bearing melanterite will all have the following properties in common: iron, sulfur in some form and lots of oxidation. You need all three to make melanterite.

Find a fault in a mine or find a place where there is water seepage in or next to a metallic mineral mine and that’s where you’ll probably find melanterite. Why? Well, for three reasons.

Another name for green vitriol and one that all of nineteenth or earlier English-speaking ancestors would have known was copperas. Along with alum, copperas was one of the essential raw materials of the pre-industrial world.

The Uses of Green Vitriol

Green vitriol – or copperas, if you prefer – was formerly used for all sorts of things and is still used today. In the Middle Ages, it was the starting material to make early formulations of sulfuric acid. It should not be a surprise that the old pre-industrial name for sulfuric acid was oil of vitriol.

Green vitriol was also used as a leather dye commonly sold as shoemaker’s black. In addition, it was utilized as a mordant to fix dyes for the coloring raw cloth – and it retains that use to this day. It was an ingredient in several black ink recipes from antiquity to the early twentieth century. In leather dye and in oak gall ink, the soluble iron from the green vitriol would react with the tannic and gallic acids in the leather or proto-ink solution, respectively, to form iron tannate and iron gallate, both of which are black.

Modern uses of this chemical compound include as a supplement for treating anemia, as a preventative medicine for constipation, as a water treatment to prevent eutrophication, as a fertilizer and lawn conditioner (often bagged and sold as copperas), and as a reducing agent in environmental remediation to reduce chromium VI to less toxic forms. Because of its ready solubility and its power as a reducing agent, it is widely used in many industrial processes.

The easiest and most ancient way to make green vitriol is to evaporate naturally-occurring spring water that was saturated with iron sulfate. As unlikely as this may sound, evaporating such saturated waters from springs or from mine drainage waters was described by the first-century AD Roman encyclopedist Pliny the Elder. Such waters still exist today, though I’m not sure anyone is using them for producing modern chemicals for sale. I’ve personally observed such waters precipitating sulfates in the California Coast Ranges.

As an example, here’s a photo I took while working at a Superfund site that shall remain nameless. The tank shown below collected the drainage of an inactive mine before it was piped into a treatment plant. The pH of this saturated solution was less than one. One of the folks I worked with on this project actually had to invent a test to measure pH less than zero in order to test some of the waters at this site. This stuff was acid mine drainage on steroids, the worst of which was later shown to be the most acidic fluid discovered on earth.

I grabbed a sample of the mine drainage in the tank and took it home with me, where I allowed it to evaporate. I got lovely green crystals of green vitriol as a result. I then used my green vitriol to dye some leather black for some reenactment stuff that I do as a hobby.

The next method for making green vitriol is to collect rocks rich in both iron and sulfur, like pyrite which is FeS2. The starting rocks are broken up and soaked, and the solutions are drawn off and allowed to evaporate, thus congealing vitriol crystals. Up into the nineteenth century, it was common to lower strips of iron into the sulfate-saturated solutions. As you may recall from the chemistry of the electromotive series from high school chemistry, the insertion of the metallic iron will force the precipitation of any copper out of the solution and provides a preferential site on the iron strips for the precipitation of the iron sulfate heptahydrate crystals. Using iron strips was necessary since copper was and is a common contaminant in metallic mineral deposits.

We get the word vitriolic from vitriol’s former association with the production of sulfuric acid.

In the later half of the sixteenth century, most green vitriol was made and sold by the Holy See. Newly Protestant England with its huge cloth trade was in trouble because it couldn’t get vitriol to fix cloth dyes in the textile trade that was its life blood. Queen Elizabeth the First supported and encouraged the creation of copperas houses for the manufacture of green vitriol using the exposed rocks method. The starting material was raw copperas – the mineral pyrite – that washed out of the London Clay along beaches in Kent and Essex.