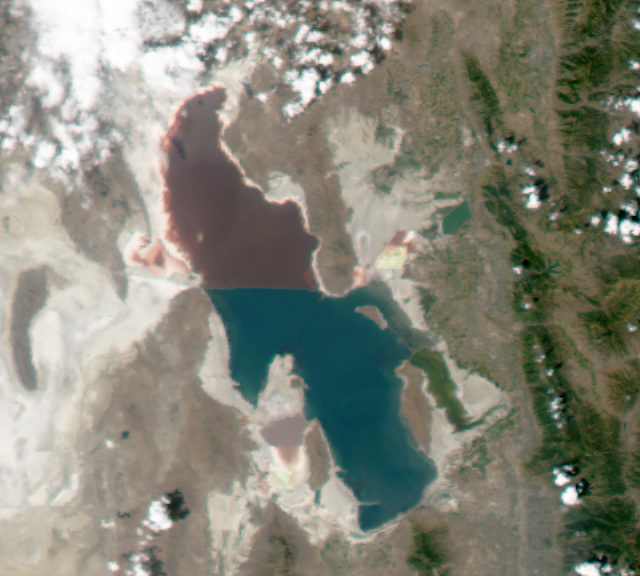 The Great Salt Lake is so salty that no fish can live in it. Regardless, it supports its own unique fishery based on Artemia salina, the brine shrimp. Only organisms adapted to extreme salinity can survive. The microscopic ones give the northern half of the lake its rosy color. The conditions that support these rosy-color organisms are:

An accident of geography

The Great Salt Lake is a terminal lake. This means its waters are trapped and never reach the ocean. Water can only leave through evaporation.

In 1959, Union Pacific built a causeway across the Great Salt Lake thus dividing the lake in two. This causeway inhibits the mixing of water between the two halves of the lake. Since around 95% of the available stream water goes into the southern half, this means that the northern arm of the lake is now more salty while the southern arm is less salty. In the northern arm, the average salt concentration is an 317 grams/liter. The southern half has an average concentration of 142 gram/liter. In terms of percent, 317 grams/liter is the same as 24% by weight, and 142 grams/liter is 12% by weight. In contrast, ocean water has an average salinity of 3.5% by weight.

USGS figure showing salinity in the north and south halves of the Great Salt Lake before and after the causeway; from https://ut.water.usgs.gov/greatsaltlake/salinity/images/saltplot2.gif

Other than salt-adapted invertebrates, the only things that live in the Great Salt Lake are salt-tolerant microbes and algae. Because of the extreme salinity, only a handful of these organisms can survive in the northern half of the lake. The most exotic of these are salt-tolerant viruses known as haloviruses. The identification of haloviruses is currently an active area of research and only a handful of studies have been published to date on their existence.

Haloarchaea are archaea which need extreme saline conditions to thrive. In the Great Salt Lake, these archaea include the genera of Halobacterium, Halococcus and Haloquadratum. They share the same protein, bacteriorhodopsin, which is a purplish-red. The rosy tint in the northern arm of the lake is partly due to the bacteriorhodopsin of these haloarchaea.

Recent research has made a tentative identification of the newly-recognized and rare halophilic bacteria Salinibacter ruber in the northern arm of the lake. The identification was based on DNA sequencing. As of the date of this post, this pink-colored microbe has not yet been cultured from out of the lake.

Dunaliella salina is the other organism behind the pink color in the northern arm of the lake. In fact, it may be the primary cause of the pigmentation. This algae is another salt lover. Its reddish coloration comes from β-carotene. In fact, Dunaliella salina is so rich in β-carotene that some people farm it or vat-grow it commercially for its carotene content.

Dunaliella veridis is the salt-loving algae common in the Great Salt Lake. It is found exclusive to the southern half of the lake but it is not at all rosy or pink. It’s green.

The header image for this blog is an overhead view of one mile of the railroad causeway through the middle of the Great Slat Lake. The top of the image is to the south so the north arm of the lake is at the bottom of the image. The white swirls in the pinkish water along the causeway are salt. These salt swirls form in the back wash of waves that hit the rip rap of the causeway.