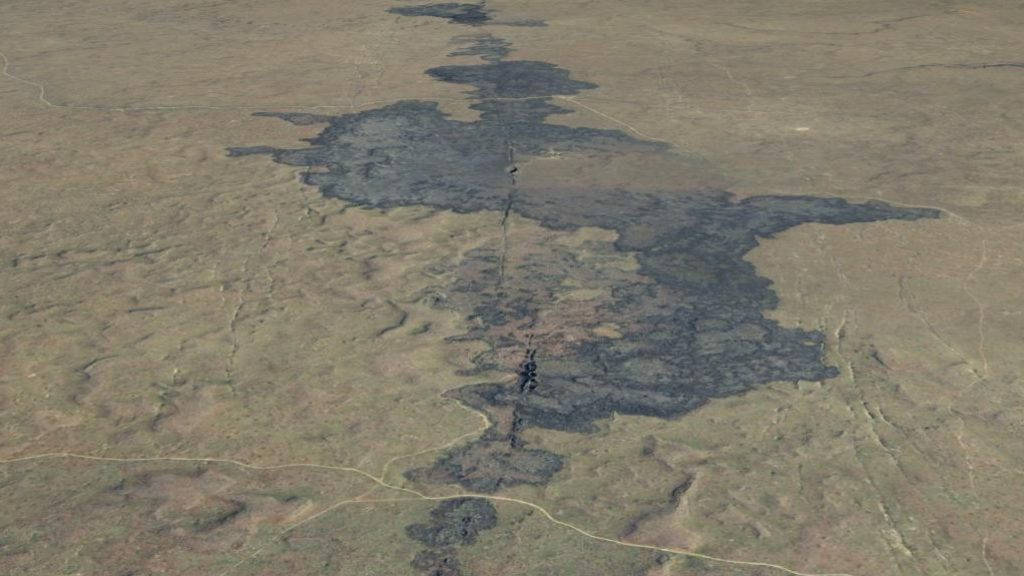 Ever watch those nature shows of volcanoes erupting where gobs of red molten lava are thrown high into the air? All that airborne lava has to come back down. When those gobs and splatters of lava fall back to earth, they tend to look like somewhat flattened blobs of bread dough. Geologists call them volcanic bombs. Today’s installment of gnarly science is about a volcanic eruption where the expected volcanic bombs went missing.

Before we go looking for the missing volcanic bombs, we first need to describe where this phenomenon occurred, in the largest active volcanic field in North America outside of Alaska. Our science mystery takes place where potatoes are famous, in southern Idaho.

THE LAVA FLOWS OF IDAHO

There is a vast plain in southern Idaho that’s shaped like a giant smile. It’s 400 miles long (~600 km) and 50 to 100 miles wide (~75 to 150 km). Along the Snake River where the soil is thick enough, people grow those famous potatoes along with sugar beets and barley. The rest of the plain is covered with grey and black basalt flows. Most of the basalt exposed at the surface is less than a half million years old, which is nothing in terms of geologic time. The youngest flows are ~2000 years old. Because the heat flow is extremely high and the basalt flows very young, geologists consider the eastern half of the Snake River Plain to be an active volcanic field. As someone who has published research on Idaho’s basalt flows, I personally would not be surprised if basalt erupted somewhere on the plain between Twin Falls and Yellowstone during my lifetime.

The Great Rift Of Idaho

One of the most impressive features associated with the flood basalts of the Snake River Plain is the Great Rift of Idaho.  The Great Rift is a series of volcanic fissures that slice across the plain trending roughly north-northwest to south-southeast. The north end of the rift is at the Craters of the Moon National Monument. The south end of the rift is somewhere buried under the Wapi lava flow. The length of the Great Rift of Idaho is about 65 miles (~100 km).

There are sets of both eruptive and non-eruptive fissures along the Great Rift. Most of the eruptive volcanic fissures are on the north end of the rift at the Craters of the Moon National Monument; however, there is one eruptive fissure set on the south end of the rift, just north of the Wapi Lava Flow. The basalt that erupted from this set of fissures is called the Kings Bowl Lava Flow. Its name comes from its most distinctive feature: a phreatic explosion crater called Kings Bowl.

Kings Bowl is an volcanic crater along the rift that formed when rising basalt lava met a lot of groundwater. The water flashed to steam causing the lava-water mix to erupt explosively, throwing lava all over the place. The gobs of basalt lava that were spit into the air formed hot gooey volcanic bombs which rained back down to earth. The farthest volcanic bombs fell a half mile from the crater. The bombs range from baseball-sized up all the way up to car-sized.

The geology word for the explosive mixing of water and lava is phreatic. If you’re not a geologist, knowing what phreatic means is useful for spelling bees; for games of scrabble and hangman; and for impressing people at parties.

Here’s a overhead view of the Kings Bowl crater. The crater is 280 feet long, 100 feet wide and 100 feet deep. There’s a halfway decent road you can take to see it when there’s no snow on the ground. It was once a tourist attraction many decades ago. The fissure at the crater has been explored to 600 feet below the surface. It’s not a nice safe cave for amateurs and it requires serious equipment and a high level of technical spelunking skill to get and out.

Once again, the scale bar is wrong because of the scaling bug when 3D and terrain options are enabled in Google Earth.

The next thing to notice is the color difference on either side of the crater. The right side is a bit lighter and more red-colored. This is from reddish cinders being tracked in on shoes and car tires by years of visitors to the crater. The right (east) side is next to the old parking lot from the former tourist attraction business. The parking lot, former picnic area and now demolished ticket office are just off the top of the photo. The dark specks on the right side are sage brush and shadscale. The one large green tree on the bottom right of the photo (to the left of the scale bar) is a limber pine.

On the left (west) side of the crater, there is a lot less soil, shadscale, and sage brush. Note all the light grey specks. Those are volcanic bombs, 1 to 2 meters in diameter. There are a lot of them. The problem here is that there are no bombs on the right side of the Kings Bowl crater. The volcanic bombs are missing. This is very unusual. For the size and the shape of the crater, there should be bombs on both sides.

My first visit to King Bowl was on a field trip in the company of geologists from Idaho State University and the Idaho National Lab. One of these sainted scientists pointed out the discrepancy of big volcanic bombs on the west side of Kings Bowl and the complete lack of bombs on the east. Of course, the person who posed the question already knew the answer to the dilemma but was having great fun torturing everyone else. It was small consolation afterward that it took him more than two decades to discover why the bombs were missing and even then, only by accident.

You might as well ask what happens to all those missing socks that go into the clothes drier and never come out. There’s nothing more animated than a gaggle of scientists floating working hypotheses in the closed confines of a field trip van. Here’s a sample of proposed hypotheses to explain the missing volcanic bombs:

It was great fun trying to come up with a plausible hypothesis to explain the missing volcanic bombs and gave everyone something to think about on the hour and half ride back to the field trip starting point. Regardless, no one solved the mystery.

The Solution to the Missing Volcanic Bomb Mystery

The Geology professor who posed the missing bomb question on the field trip was told the answer by chance by someone who lived in the nearest town, American Falls. Bored teenagers are the reason there are no volcanic bombs on the east side of the Kings Bowl crater.

There’s not a lot to do at night in a small town where potato farming is the basis of the local economy. For years, teenagers with pickup trucks would drive out to Kings Bowl for some fun, especially after high school graduations. They would use their pickup trucks to drag or push the big volcanic bombs to the lip of the crater. Then they would push them over the edge. Apparently it was a big deal if the bomb broke apart on its way down to the bottom of Kings Bowl. The reason they favored the east side of the crater is because the only decent access road comes in from the east, from the nearby towns of Aberdeen and American Falls.

I’m sure there’s some profound moral about science here to expound upon, but I can’t come up with any at the moment.

If you want to know more about the active volcanism of southern Idaho, the Digital Atlas of Idaho is a good place to start.