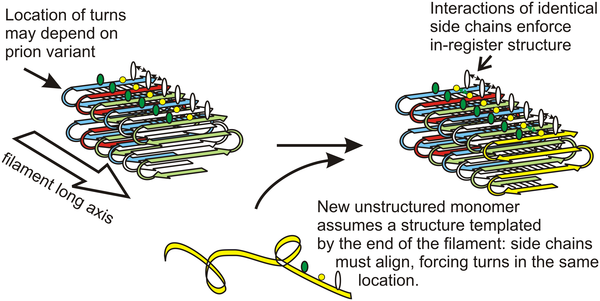 Kuru: The Rarest Infectious Disease in the World!

Here’s another blogmas guest post for you all, with another reason to avoid eating brains if you’re not a zombie: a prion disease called “kuru“.

Kuru was once listed in the “Guinness Book of World Records” as the rarest (transmissible) disease in the world. It was a type of brain disease. Another name for it is “laughing sickness” because one of its symptoms is sudden bursts of laughter from its victims. It only occurred among one specific group of people native to Papua-New Guinea. Kuru is probably completely non-existent now, so I’m guessing new versions of the Book of World Records no longer lists it.

Unlike nearly all other infectious diseases, kuru is not caused by bacteria or viruses. Kuru is actually caused by a mangled form of a completely normal brain protein. A protein’s function in the body is determined by the exact shape it takes. In prion diseases, a molecule of one particular protein (called “Prion Protein“, or “PrP” for short) has become rearranged into a different shape. This new shape just happens to stick to normal-shaped PrP, and then induces the normal-shaped protein to also rearrange into the malfunctioning shape!

In this way, a disease-causing prion is more like a poison than a “disease”, but because its “poisonous” activity actually makes more of itself, it grows and spreads in a way that’s similar to a virus. The clumps of mis-shaped PrP building up slowly kill off the brain cells around them, leaving small but growing holes all throughout the victim’s brain. This is where the scientific term for these kinds of diseases come from: “spongiform encephalopathies”. In plain English: “diseases that fill your brain with holes like a sponge”! This process goes very slowly at first. The “incubation period”, (the amount of time that passes between being infected and the first noticeable signs of disease) for spongiform encephalopathies is sometimes decades.

When the damage to the brain from these sorts of diseases gets severe enough, symptoms become noticeable.

How did Kuru Spread?

The Fore people of Papua-New Guinea used to practice ritual cannibalism when any of them died. This included cooking and eating the brains. Unlike bacteria and viruses, prions are very resistant to destruction by heat and acid, so cooking doesn’t get rid of them. Because of the very long incubation time, it was not obvious that this had anything to do with the disease, and they tended to blame sorcery for it.

This practice stopped in the 1950s, and by the 1960s cases of kuru dropped off rapidly. It took over 40 years before the disease completely disappeared, because of the long incubation time. The last definite death from kuru was in 2005.

There are actually several known prion diseases. You may not have ever heard of kuru before, but you’ve likely heard of a different prion disease: “Bovine Spongiform Encephalopathy”, more commonly known as “Mad Cow Disease”. This became news in the 1990s when it appeared this prion disease of cattle was also able to infect at least some humans who had eaten meat from infected cows. It had spread among the cattle by the now-banned practice of mixing leftover cow parts (including brains) into cattle feed. This is now banned, thankfully.

This is the only case of a prion disease “jumping” from non-human to human that we know of, but there are similar diseases in other animals:

I’m tempted to end this post with a “In Papua-New Guinea, brains eat you” joke, but I probably shouldn’t.

One thought on “Kuru and prions: more reasons not to eat brains”