Today we look at something I know you’ve all been wondering about for years. Well wonder no longer for enlightenment on this electrifying subject is now here!

WHY CARE ABOUT SPARK PLUG INSULATORS?

History-of-technology stuff is really cool. I hope you get as much a charge out of this as I did.

In 1902, Gottlob Honold and Robert Bosch built the first true magneto ignition system with the first-ever high-voltage spark plugs. Though there have been many improvements since then, the basic principles of gas engine ignition designed by Honold and Bosch are still the same.

Ever since 1902, the overall design of high-voltage spark plugs has three parts:

When a charge is delivered to the central electrode of a spark plug, that charge will jump the air gap between the electrodes as a spark. If the timing is right, then the spark will ignite the fuel-air mixture in the engine cylinder. Thus the spark plug is the thing that ignites the combustion in a gasoline combustion engine. Needless to say, it’s important for the spark plug to work well.

Part of working well includes effective insulation. It’s bad if electricity can jump from the central electrode to the conductive plug body at a location other than the electrodes. Therefore, the material used as the insulator is crucial for the spark plug to work well.

Refractory porcelain was the logical first choice for spark plug insulators but it had some problems which were quickly discovered. Notably, porcelain was brittle. When it heated up, it also did not expand as much as the metal in the electrode or plug body. As a result, the earliest porcelain insulators didn’t last very long before they broke.

On of the first materials used to add to or replace porcelain was mica.

Mica was used in spark plugs right up to World War II. An example of mica in a spark plug is shown in the figure below:

One of the problems with mica as an insulator was the build up of carbon deposits, which fouled up the conduction of electricity through the central electrode. In addition, mica was not as good as porcelain in insulating against stray electric currents.

One of the other mineral used to compensate for the weaknesses of mica and porcelain was steatite. Most people know steatite by its common name of soapstone. It’s a rock that’s mostly talc. Because it’s not as strong and flexible as mica, it was often used with mica, like the spark plug design shown below:

Only the Champion brand of spark plugs used sillimanite as an insulator, from 1921 until 1945.

Most of the sillimanite in spark plugs started life as the mineral andalusite, initially mined from the Champion Mine in the Inyo-White Mountains, not too far from Death Valley in California.

The andalusite deposit at the Champion Mine was a one-of-a-kind mineral body. No one in the world had anything like it. Champion essentially had a monopoly on this material.

Sillimanite-insulated spark plugs were by far the best available. Every race car and almost every air plane engine used Champion plugs throughout the world because of their reliability and long-life.

One other andalusite-and-sillimanite mine eventually opened up outside of Lovelock, Nevada for providing spark plug insulators. It too was owned and operated by Champion. 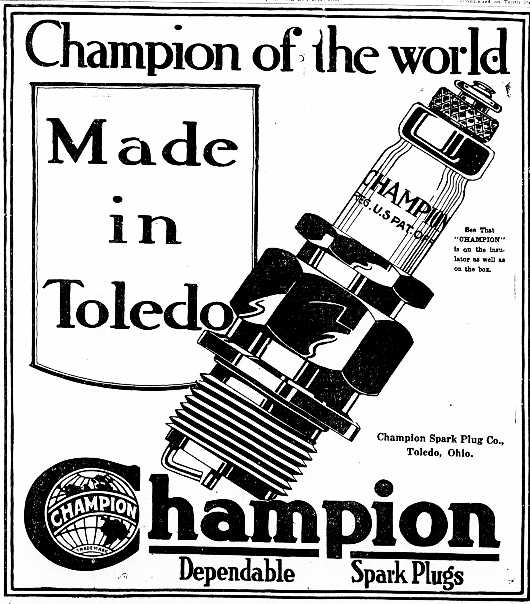 Other spark plug companies did not care for the dominance of Champion and its monopoly on andalusite and sillimanite. In the 1930s, both Siemens in Germany and AC Spark Plugs in the United States pioneered the use of sintered alumina as an insulator material. Sintered alumina has almost the same thermal expansion as the metal parts in a plug along with three times the strength and insulating ability compared to sillimanite. As soon as War World II was over, sintered alumina replaced all the mineral-based spark plug insulators because it really was a superior material for the job.

The Champion Mine in Inyo County, California, remains one of the most famous mining locations among mineral enthusiasts to this day.

All of the images used in this article are in the public domain.

4 thoughts on “a Brief History of Spark Plug Insulation”