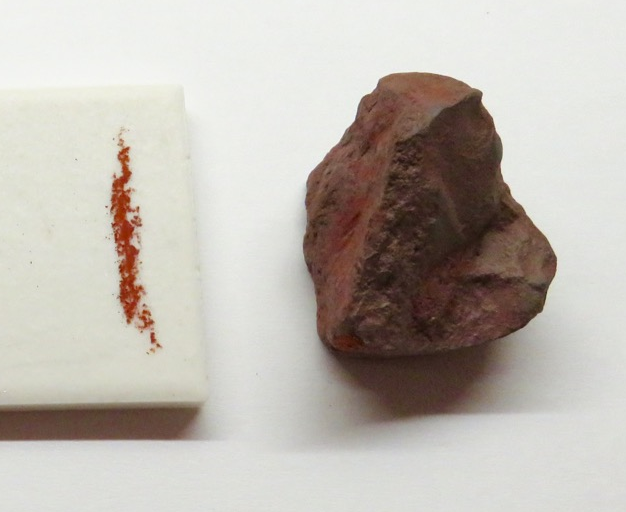 This is the bite-sized Merry Blogmas 2017 science post for December 13. Only 12 more to go until Christmas!

It’s one of those physical properties you never hear about it school. For example, I personally learned about it from reading a book in graduate school on the science of color. Ideochromatism is a really cool thing because it explains a lot about the things we use as pigments.

Ideochromatism is the property of being self-colored. The Latin roots of the word mean just that: self-colored.

An ideochromatic material is anything that retains its natural color at any grain size. What this really means is that you can take an ideochromatic mineral, for example, and powder it; then, when you’re done, its powder will be the same color as the big lump you started with.

A good example of an ideochromatic material is the mineral hematite. You most often find hematite as the main mineral in that brick-red rock called limonite. When you powder it up, the powder is just as brick red as the mineral you started with. It is the mineral that’s in the photo at the beginning of the post.

There are a lot of ideochromatic materials out there. Some are natural minerals like red cinnabar, yellow sulfur and blue azurite. Sulfur is too reactive to be used as a color in paints but cinnabar and azurite are famous for the color they have given to artists’ pigments.

It’s an odd thing but there are some allochromatic materials like titanium oxide that make wonderful white pigment. Titanium oxide is dark brown or black in its massive form as the mineral rutile. When you powder it up, it turns into an opaque white powder good enough to be used in paint.

The banner photo of hematite and its streak is a modified version of an image by Karla Panchuk (2015), CC BY-SA 4.0 via Wikimedia Commons