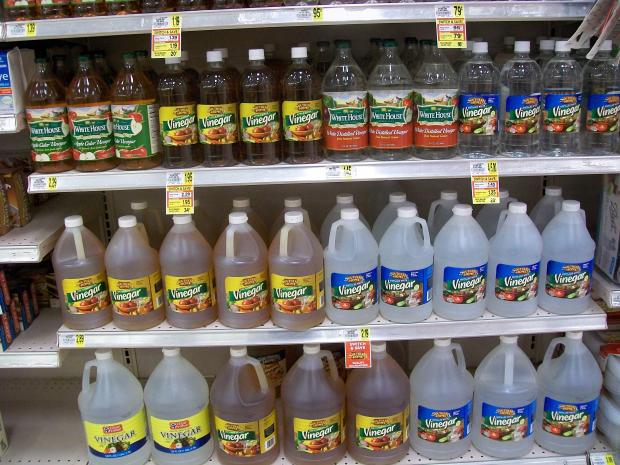 Today’s “Merry Blogmas 2017” post is about the vinegar trick for peeling a hard-boiled or soft-boiled egg. This trick isn’t for everyone, but if you’ve tried the other “easy-peeling” measures that usually work, the vinegar trick may be for you.

Seriously, if you understand how an egg is built then peeling that egg is a lot easier. There’s a previous article on this blog that has discussed this topic in detail. It might help you to check it out.

We’re not going to cover peeling eggs in general. Today is just for the vinegar trick.

White vinegar is just plain acetic acid plus water. It’s what you want to use on egg shells.

Egg shells are mostly calcium carbonate with the chemical structure of the mineral aragonite. The bit about the aragonite structure doesn’t make anything easier or different for peeling eggs; but it is a cool fact that can entertain your friends and make your look smart and science-savvy.

Dilute acetic acid, better known as white vinegar, is one of those inorganic acids that dissolves calcium carbonate. What this means in terms in egg shells is this:

Putting white vinegar in your egg water will thin the egg shell.

This should be a no-brainer: thinner egg shells are easier to peel. A thick and hard shell is harder to crack without cracking the egg white underneath. Putting vinegar in your egg water will not help the separation of the membranes between the shell and the cooked egg white, which is the other obstacle in peeling eggs. Regardless, if you can’t crack an egg cooked in its shell without cracking the egg white at the same time before you start peeling, then try some vinegar in your egg water.

The vinegar trick really does work to thin an egg shell, You can run an experiment to demonstrate this. Here’s what to do:

One thought on “Vinegar for Peeling Eggs”