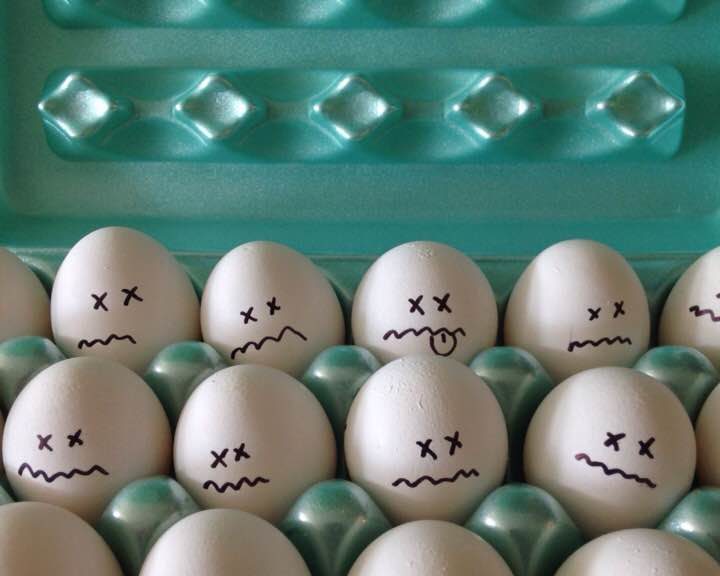 There are way too many variations out there on how to cook and peel a hard-boiled egg. Many of them are just plain bunk. The truth is that there are several different paths to cooking the perfect hard-boiled egg. Our goal here is to show you the science behind boiling an egg because if you understand the science, you will then know what to do to achieve that perfect egg and peel it too!

We touched on the topic of egg acidity very briefly last week. Let’s go back now and look at it in a little more detail. The acidity inside the egg affects how it cooks and peels, so understanding this will help you cook that perfect hard boiled egg.

The Air Cell and Carbon Dioxide

Carbon Dioxide and the Acidity of Egg White 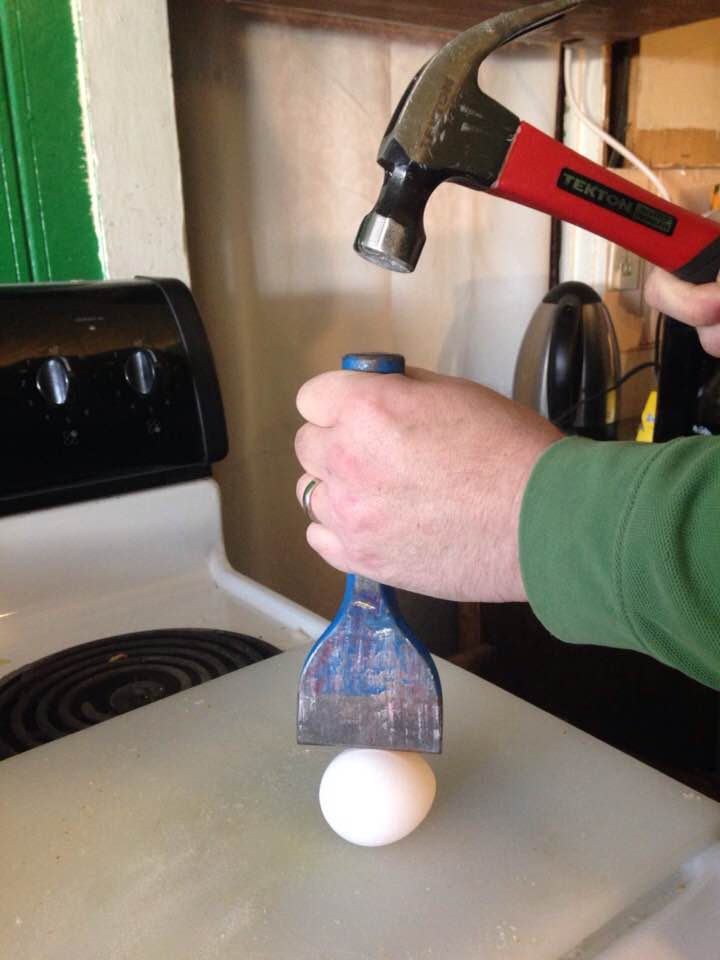 Why Older Eggs are Easier to Peel

There are two things that make an older egg easier to peel than a really fresh one:

So letting a fresh egg age before you boil allows the air cell and its condensed water to work the two membranes apart. Since the outer membrane wants to stick to the shell after boiling, this makes it easier to peel the shell and outer membrane away from the inner membrane. Letting the egg white sit so it can become more alkaline helps to get the inner membrane off while peeling. Really fresh eggs do not have a favorable biochemistry for easy peeling

If You Must Boil a Very Fresh Egg

Here’s advice from the famous food scientist Harold McGee: if you absolutely have to boil an egg less than a few days from the coop, there are two things you can try to improve its ease of peeling:

WHAT HAPPENS WHEN YOU BOIL AN EGG?

When you cook an egg, what you are really doing is denaturing proteins. That’s a short statement that’s packed full of meaning. We need to explain the structure of proteins to understand it and why it matters for boiling eggs.

The Mysteries of Proteins

A protein is a polymer, which is that same thing as saying its a molecule that made up of repeating units. The repeating units are somewhat special since they are strands of different amino acids linked together. Hydrogen and other elements like sulfur or calcium form bonds with the amino acids. The structure of any given protein depends on:

Some proteins form in long skinny strands like the keratin in your hair. Some form in ball-like shapes like casein in milk. Albumin proteins in eggs tend to form wads of kinked up amino-acid strands.

What Happens to Proteins When You Boil an Egg

Here’s a good one to remember for impressing friends at parties: when you cook an egg, you denature its proteins. It’s positively denatural!

Seriously, the thing that happens when you mess up the bonding in a protein is called denaturation. There are all sorts of ways to denature proteins, with chemicals or with sunlight for example. In the case of boiling eggs, we denature the albumin proteins with heat.

As you heat up a protein, you start to break the weaker bonds, which tend to be the ones between the amino acid strands. This causes the protein to uncoil and unkink. If you add more heat, the uncoiled amino acid strands can bond together, not just to themselves but to strands from their uncoiled neighbors too. This new bonding makes a new and different arrangement of amino acid chains, thus destroying the structure of the original proteins. In a sound bite, that’s what cooking really is: just a rearrangement of molecular structure.

Here’s what happens to the egg whites:

Egg yolks are a little different:

HOW TO COOK THE PERFECT HARD-BOILED EGG

Look at what happens to whites and yolks with too much heat: the whites go rubbery and the yolks go dry and greenish, complete with sulfur smell.

Did you think this was going to be easy?

It just gets worse, doesn’t it? Water, even at higher elevations as we learned in PART I, boils at temperatures higher than the set-up temperatures of both egg whites and yolks.  Obviously, you don’t want to boil any egg too long or too hot.

Are you ready for the good news?

The Good News: Eggs Cook From the Outside In

When you boil and egg, the egg white heats up and cooks first. It takes time for heat from the hot water to penetrate to the the yolk which cooks last.

If you stop the cooking process at just the right time, the white will set firmly and the yolk will too at the same time but at a lower temperature  because of the delay in the heat penetrating inward.

The problem here is that nature likes to achieve an equilibrium. This applies to temperature as well as to gas exchange, as we discussed earlier. With temperature, the cold egg in the boiling water is out of equilibrium with the water. First the whites heat up and cook. The yolk heats up and cooks slower. If the egg stays in the water too long, then the termperature of the water, the egg white and the yolk will eventually all be the same. The resulting hard-boiled egg will be a dry, rubbery, sulfurous puck of over-cooked proteins (and other stuff) fit only to give to unwelcome uninvited relatives.

The trick is knowing how to heat up the egg and when to remove it from the heat. As for the secret to doing this:

There is no one true way to cook a hard-boiled egg.

Sorry to disappoint you but it’s the truth. There appear to be three things that are common to most successful hard-boiled egg methods: 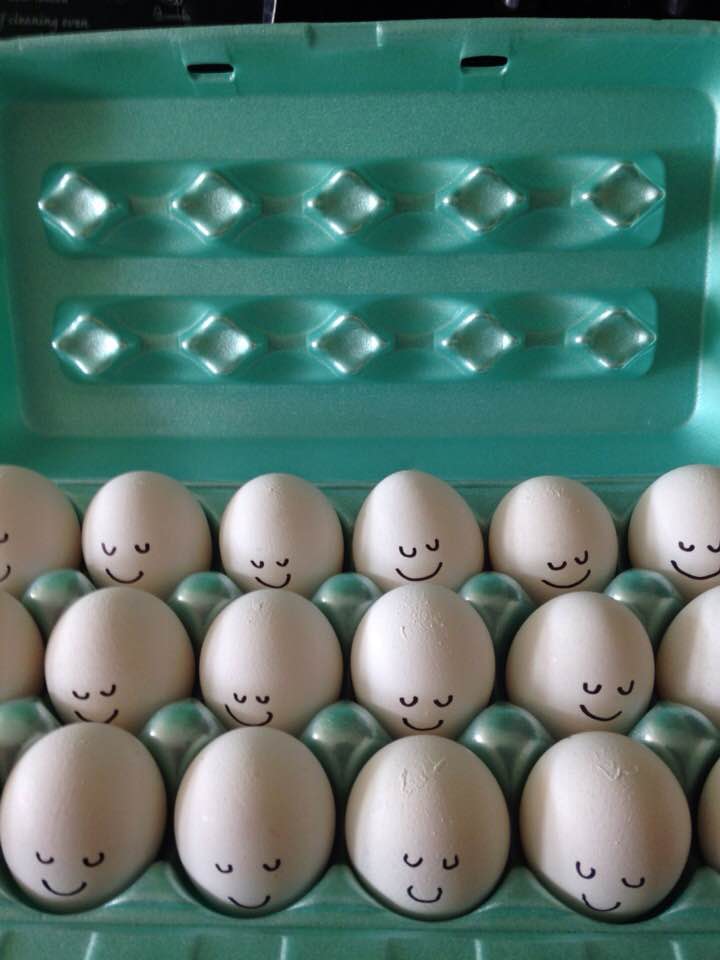 Here are some well-considered ways to cook hard-boiled eggs from people who have put some science and some empirical experimentation behind their work:

“First, place the eggs in a saucepan. Add enough water so that there is an inch of water covering the eggs. Heat the water until it’s just about to boil, then take the pot off the heat and cover it. Let the eggs sit in the hot water for 25 minutes, then plunge them in ice water.”

“Lower your eggs straight from the fridge into already-boiling water, or place them in a steamer insert in a covered pot, steaming at full blast on the stovetop. If boiling, lower the heat to the barest simmer. Cook the eggs for 11 minutes for hard or six minutes for soft. Serve. Or, if serving cold, shock them in ice water immediately. Let them chill in that water for at least 15 minutes or, better yet, in the fridge overnight. Peel under cool running water.”

What the instructions above don’t tell you is that they are probably based on cooking at sea level. If you remember PART I, you’ll immediately realize that cooking times are going to change a bit as you go higher in elevation. If you live in Denver or Idaho or Wyoming or some other high place, that cooking time is going to lengthen a bit. Above 10000 feet (3048 meters), your egg white might not even set up without the help of a pressure cooker. I know some folks who have worked as cooks at Yellowstone and they hate to boil eggs!

The moral to this story is: you now know the science so go forth and determine your own optimum cooking method and cooking duration. Get some eggs and experiment to find your own variables that are a best fit for the eggs you either gather yourself or buy at the store, and for the elevation where you live. You don’t need salt or baking soda or any other gimmicks. You just need the science you’ve learned in this series of articles and the willingness to spend a few hours in your kitchen finding out what works best for you.

You may have seen it mentioned that some people like to add vinegar to their egg water. This actually isn’t a gimmick. There’s a real reason behind this, which I will discuss tomorrow in a separate blog post as part of my participation in the “Merry Blogmas 2017” campaign.

The three uncredited photos were taken by the author and are included in the this blogs creative commons license.