Our daily “Merry Blogmas” posts on fun bite-sized science topics will run until Christmas. Today we look at the invention of spark ignition in the strange contraption called Volta’s pistol.

Though originally scheduled for today, part III of the food science of hard-boiled eggs, will post tomorrow.

WHY YOU NEED TO KNOW ABOUT ALESSANDRO VOLTA

Alessandro Volta is important. A little over two centuries ago, Volta invented the battery. He also discovered methane. More important than either, he’s that so-and-so who came up with electrochemical potentials and the electromotive series. Yes, this is the guy who has made generations of high school chemistry students miserable. Because of Alessandro Volta, hundreds of millions have been tortured with the horrors of half-cell reactions. Now you know who to blame.

The volt is named after him.

Volta invented spark ignition because he wanted to demonstrate the concept of flammable gas. The contraption he made to do this is called Volta’s pistol: 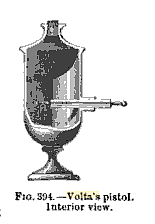 Back in those days, before Faraday invented the induction coil, the only way to produce high-voltage electricity was with a static-charge generator. That’s what Volta used as his source of electricity.

In the nineteenth and early twentieth centuries, Volta pistols, cannons and mortars were popular for demonstrations of spark ignition in physics classes.

WHY DOES THIS EVEN MATTER???

Both images today are from an 1877 edition of a text book called  “The Forces of Nature, A Popular Introduction to the Study of Physical Phenomena” by Amédée Guillemin, via Google Books.