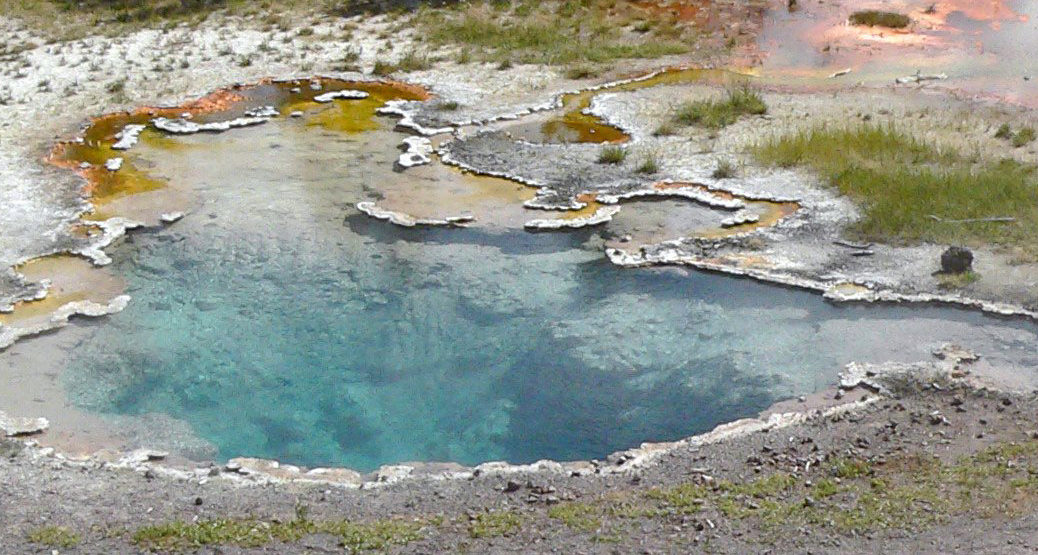 THE BIRTHPLACE OF DNA FINGERPRINTING BY THE PCR METHOD

The banner image today (above) is a photograph of Octopus Spring in the Lower Geyser Basin of Yellowstone National Park. If this spring was anywhere else, there would probably be a shrine here for this is the birthplace of modern “cheap and easy” DNA profiling. If you didn’t know Octopus Spring existed, you would just drive on by and miss a place that changed the face of forensic and genetic science.

Professor Alec Jeffreys at the University of Leicester in England developed the concept and technique of using strands of DNA fragments to “fingerprint” genetic information. In the early 1980s, when Jeffreys inventing DNA fingerprinting, the only method at the time to process DNA strands used an organic compound called a restriction enzyme.

While early DNA fingerprinting had the potential to revolutionize criminal justice, it was slow, it was expensive, and it required analysis by the handful of experts who knew how to do it.

In 1983, biochemist Kary Mullis had the bright idea: it might be possible to make a multitude of copies of DNA strands if only the right polymerase enzyme could be found. The concept works like this:

Mullis’ bright idea was to find a polymerase that could survive the heat of DNA unzipping. He found one. It originally came from Octopus Spring.

The method based on Mullis’ bright idea is called polymerase chain reaction or PCR. Using PCR, it take about two hours to produce a DNA fingerprint in gel. The patterns in the gel can be read with normal vision – no microscope required. The process is so simple that many undergraduate microbiology labs teach it to college students.

Mullins received the Nobel Prize in Chemistry in 1993 for his bright idea.

University of Wisconsin microbiologist Thomas Brock received a National Science Foundation (“NSF”) grant.  The money funded a decade of work on the microorganisms of the hydrothermal waters of Yellowstone National Park, from 1964 to 1975. One of the microbes he discovered is the bacterium Thermus aquaticus, which loosely translated from Latin means “from hot water.” The name is sometime abbreviated as T. aquaticus, and since the bacterium is now famous, its name is commonly abbreviated as Taq.

Brock found T. aquaticus in the pink microbial mats that grew around and just downstream of Octopus Spring. It survives in thermal waters ranging from 50 °C to 80 °C (122 °F to 176 °F).

Octopus Spring is in the White Creek Group of hot springs in Lower Geyser Basin, across Firehole Lake Drive from Great Fountain Geyser, one of Yellowstone’s famous predictable geysers. Eruption times for Great Fountain Geyser are posted at the ranger’s desk just inside the entrance to the building with the cafeteria that faces Old Faithful.

The Moral to this Story

The next time you run into someone who complains about government grants for basic scientific research, tell them about Professor Brock and Octopus Spring. There is nothing wrong with supporting “curiosity-driven research” which expands our knowledge about the world. The multi-million dollar DNA-fingerprinting industry wouldn’t exist today without that government grant that funded Professor Brock’s research. Yet ever since President Reagan’s time, Congress has continuously cut the NSF budget.

The banner image today is of Octopus Spring, by Davis Strong of Pennsylvania State University, via the NASA Astrobiology Institute