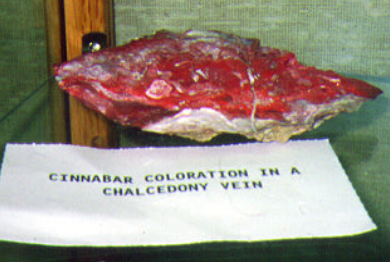 Merry Blogmas! I have decided to join the blogmas insanity and post a short blog post everyday until Christmas. Other than the regular weekly blog posts, the blogmas post will all be off-the-top-of-my-head brain dumps without citations.

It’s one of the coolest minerals going:

The best collectable cinnabar minerals are brilliant crimson red. If you grind them up to make vermilion pigment for paint, that crimson mineral turns into a screaming scarlet powder.

Cinnabar is not water nor lipid soluble. Most folks could eat a small amount and it would just pass out the other end…not that I’m recommending that to anyone. Cinnabar is an inhalation hazard because it is always off-gassing mercury vapor – and mercury vapor will kill you with a nasty lead-up of neurological symptoms before you croak. It doesn’t pose much danger if you have a specimen or two in your mineral collection but it does nasty things to miners. Even with modern safety equipment, mercury miners in Spain only have a working career of about 15 years before neurological symptoms force them to retire.

The Name of Cinnabar

Cinnabar is one of the oldest minerals names and words still in use. To my knowledge, the first recording of cinnabar was in the ancient Greek book On Stones, by Theophrastus, a student of both Plato and Aristotle. The ancient Greeks pronounced the first letter as a hard “c” and not the soft “c” that sounds like an “s” which we use in modern English.